Chamath Palihapitiya, one of the figures most associated with the craze for blank-cheque companies, is planning to raise $800m for four cash shells that will target biotechnology businesses, injecting a jolt into a market that has faltered in recent months.

The plans for the new special purpose acquisition companies, disclosed in securities filings, showed the billionaire investor and former Facebook executive is teaming up with new partners for his next project. Spacs raise money in an IPO and then look for a private business to acquire.

The four new Spacs, all with ticker names beginning “DNA”, will work in partnership with Kishen Mehta, a healthcare-focused portfolio manager at Suvretta Capital Management.

Palihapitiya has a longstanding partnership with Ian Osborne, a British investor. The pair launched six Spac vehicles together under the Social Capital Hedosophia name and have taken four companies public through reverse mergers. Palihapitiya will continue to work with Osborne, a person familiar with Social Capital said.

Another difference is that Morgan Stanley will advise Palihapitiya on his latest venture. The serial Spac sponsor had previously relied on Swiss lender Credit Suisse.

Palihapitiya has also decided to forgo warrants for his latest Spac series in what will be a test case on investor appetite for vehicles without such a sweetener for early backers.

Sponsors have come under criticism for handing out free warrants to early investors who can keep a hold of them even if they sell out of the company. Warrants, which convert to stakes in the new company at a strike price of $11.50, tend to dilute shareholders who buy in later.

The timing of Palihapitiya’s new Spacs comes at a tricky juncture for a market struggling in the face of increased regulatory scrutiny and waning investor confidence.

Palihapitiya, referred to by some as the “Spac King”, has also become the target of criticism for promoting the blank-cheque companies to his followers while also cashing in on one of his deals. A representative for Palihapitiya declined to elaborate on the securities filings.

The new launches come after a fallow two months for new Spac listings, which have slowed dramatically after US securities regulators took aim at the vehicles and banks curtailed lending to hedge funds that provided much of the capital.

Some 32 Spacs listed publicly in April and May, down from 298 in the first quarter of 2021, according to data provider Dealogic. More than 400 of the vehicles that have launched since the beginning of 2019 are still looking for companies to acquire, according to Refinitiv data.

Babylon to list in New York at $4.2bn valuation, backed by Palantir

If Lordstown was one of its own electric pick-up trucks, it would have conked out a couple of feet from the charging point. The US group has warned it could fail as a business, running out of cash before even starting commercial production.

Lordstown only listed via a $1.6bn Spac takeover last October. The wheels are coming off fast. That confirms the weakness of the business models of many electric vehicle companies. US markets exuberantly chose to overlook these when the groups listed, excited by the overblown forecasts permitted once a company lists via a takeover by a special purpose acquisition vehicle.

A two-thirds collapse in Lordstown’s shares since February is further validation for Hindenburg Research, which last year took a successful swipe at electric freight truckmaker Nikola. The short seller questioned Lordstown’s sales figures in March. Last month, the company said production of its $52,500 Endurance pick-up truck this year would be “at best” just half prior expectations of 2,200 units.

At least 18 electric vehicle and battery companies went public via Spac deals from the start of 2020, raising a combined $6.6bn from investors, according to Refinitiv. Few of these companies generate significant revenues. Many of them have missed targets.

Shares in Canoo are more than 50 per cent below a December peak after ditching many of its goals. XL Fleet has lost even more of its value after it abandoned guidance for 2021 revenue.

Traditional automakers have rebounded. General Motors shares are up by a half since the start of the year, for example.

The Spac listing process is partly to blame for over-promising by EV makers. It enabled them to publish very optimistic financial projections, compared to what is permitted in a traditional IPO.

Investment often involves backing what sceptics see as a long shot. Tesla took years to hit production targets and turn a profit. The added problem for investors now is that EV production has become a crowded field. Heavy research is required to identify a hot prospect among the no hopers. Extra scepticism applies to businesses listed via a Spac.

The Lex team is interested in hearing more from readers. Please tell us what you think of Lordstown and other EV Spacs in the comments section below.

China Three Gorges Renewables Group’s stock surged by 44 per cent on its debut after the company raised $3.6bn in China’s largest initial public offering of 2021.

Shares in the renewable energy arm of China Three Gorges Corp, the state-owned company that lends its name to the hydropower dam on the Yangtze river, shot up the maximum daily amount permitted by the Shanghai stock exchange on Thursday.

The group raised Rmb22.7bn ($3.6bn) in its IPO, the largest equity debut in the country since a $7.6bn share sale by China’s biggest chipmaker, Semiconductor Manufacturing International Corporation, last July. The first day jump pushed the company’s market capitalisation to $17.1bn, according to Bloomberg.

The day one pop for China Three Gorges Renewables, which also has interests in wind power, came as China faces a sharp rise in the cost of coal-fired power.

“It’s not just a trend in China — it’s a trend across the world,” Pang said.

Demand for shares in the IPO outstripped supply 78 times, according to the company.

The group will use part of the share sale proceeds to cover almost half the cost of seven offshore wind turbine projects, as it and other renewables companies rush to complete infrastructure before government subsidies expire at the end of the year.

“We anticipate China Three Gorges will strive to finish the projects this year in order to receive the subsidies,” said Apple Li, a credit analyst at S&P Global Ratings.

The credit rating agency said this week that the IPO would provide a significant injection to the balance sheet of parent group China Three Gorges as the subsidiary pursues an “ambitious non-hydro renewables development plan” over the next few years.

China Three Gorges Renewables on Tuesday launched its first floating offshore wind power platform off the coast of Zhejiang province in south-eastern China. The company said the platform could deliver “green and clean energy for 30,000 households a year”.

Unlike fixed wind turbines, which can only operate in shallow waters, floating turbines can generate electricity further offshore, harnessing the power of stronger ocean winds. 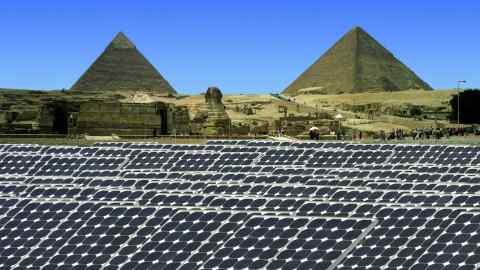 In September, China committed to achieving carbon neutrality by 2060, but its industry-fuelled recovery from the Covid-19 pandemic has put pressure on its environmental ambitions. In 2020, it produced record amounts of steel and increased approvals for new coal plants.

Research last year led by Wang Muyi, an analyst at UK think-tank Ember, found that new wind, hydro, solar and nuclear energy investments could not keep up with a sharp rise in electricity use in China between May and October.

The country is also suffering from a shortage of coal as industrial activity booms, pushing up prices. Last month, a state council meeting chaired by Premier Li Keqiang emphasised the need to further tap China’s “rich coal resources”, but added that the capacity of wind, solar, nuclear and hydropower would be increased to ensure energy supply this summer.

Are you curious about the FT’s environmental sustainability commitments? Find out more about our science-based targets here

Shares in music group Believe, which has set out to create a novel music label for the streaming era, fell more than 17 per cent on its first day of trading, in what is likely to be a blow for the French market as it tries to recover from pandemic volatility.

Believe, whose brands include New-York based platform TuneCore and its own family of labels, reached a valuation of €1.53bn as its shares closed at €16 on Thursday, down from the offer price of €19.50.

The flotation marks the first technology listing on the Euronext Paris bourse since 2014, when online payments group Worldline went public, and is among roughly 30 flotations in the pipeline of the Paris market.

Believe had already priced its initial public offering at the bottom of its scaled-back price range, of between €19.50 and €22.50 a share, which would have given the group a market value of €1.9bn to €2.1bn.

The disappointing response to the listing is a setback for the Paris market, which is trying to establish itself as a location for IPOs and foster the growth of tech companies. The fact Believe is in a fast-growing sector that is popular among investors is likely to add salt to the wound.

The slip in Believe’s valuation on its debut follows a weak run for tech flotations this year after Deliveroo’s shares fell 26 per cent on the company’s first day of trading in March, wiping almost £2bn from its opening £7.6bn market capitalisation.

Other French IPOs lined up for this year include OVH, a cloud computing provider, and Aramis, the online seller of second-hand cars that is a unit of carmaker Stellantis.

Believe has been valued at a multiple of roughly half that of other music majors such as Warner Music Group and Universal on an enterprise value-to-sales basis for 2022, according to a person close to the company. It is about two-thirds that of Spotify.

The person said the limited level of free float shares — at only 15 per cent — damped the share price, although they acknowledged Believe’s atypical model also made investors cautious.

“It’s a hot market and a very attractive model, a lot of investors acknowledged that, but in the end [Believe] looks a bit like the underdog in this market,” they said. “There is a wait-and-see attitude from some investors.”

Founded in 2005, Believe has been looking to capitalise on growing enthusiasm for the music sector, which has returned to growth after two decades in decline.

Believe works with independent musicians and music labels to build popularity via social media and put their work on streaming music platforms. These include newcomers and more established artists, such as French rapper Jul, UK artist La Roux and Lebanese singer Nancy Ajram.

The company, which serves more than 850,000 artists, intends to use the €300m it has raised to expand into new countries, both through organic growth and further acquisitions.