Britain and the EU are poised to agree a new “talking shop” for co-operation on financial services, but the deal will still leave the City of London facing major barriers to trade with the 27-member bloc.

The two sides are closing in on an agreement on a memorandum of understanding for their future relationship on the financial sector, aimed at creating “a stable and durable” basis on which to build co-operation.

Mairead McGuinness, EU financial services commissioner, said at the weekend she was “very hopeful” the memorandum would be agreed imminently. “There’s good news on that front,” she told the BBC’s Andrew Marr show. The commissioner is due to assess progress with Bank of England governor Andrew Bailey in a meeting on Monday.

The Treasury declined to comment, but UK officials hope the new framework for talks between regulators in London and Brussels will be signed off, on schedule, this month.

After several months of acrimonious post-Brexit exchanges between the two sides on a range of issues — from Northern Ireland to vaccines — the creation of a forum for talks on financial regulation and supervision will be seen as a minor step forward.

McGuinness said the two sides were “working really well together”, but the new dialogue arrangements — similar to the ones Brussels has with the US — will not in themselves settle sensitive issues of market access for the sector.

“It’s not a substitute for a relationship built on trust,” said Miles Celic, chief executive of TheCityUK lobby group. “There’s not much point if it’s a forum for people to shout at each other.”

In particular, the EU appears to be in no hurry to grant “equivalence” status to British financial services rules, a designation that would allow UK companies more direct access to the bloc’s customers.

Some in the City of London believe Brussels will never grant full equivalence, while Bailey has warned Britain would never sign up to being a “rule-taker” from Brussels.

Jonathan Hill, the UK’s former financial services commissioner to the EU, told the FT in January that Brussels would not do Britain any favours: “Given that their strategy is to build up the EU, why on earth would they?”

Nick Collier, managing director of the City of London Corporation’s office in Brussels, has previously called the new regulatory forum planned in the draft memorandum of understanding a “talking shop”. Its remit — set out as part of the EU-UK trade deal — would include discussions on preserving financial stability, market integrity and protecting investors and consumers. 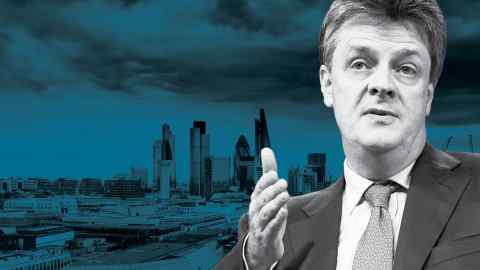 It will also consider “how to move forward on both sides with equivalence determinations between the [EU] and the UK without prejudice to the unilateral and autonomous decision-making process on each side”.

But EU officials have made clear that those decisions would remain firmly in Brussels’ gift, and that it is still reflecting on what market access arrangements would be appropriate.

McGuinness said: “We will not be recreating the conditions of the single market for the UK because the UK chose to leave.”

European equities rebounded from falls in the previous session, when fears of a US interest rate rise sent shares tumbling in a broad decline led by technology stocks.

Treasury secretary Janet Yellen said at an event on Tuesday that rock-bottom US interest rates might have to rise to stop the rapidly recovering economy overheating, causing markets to fall.

Yellen then clarified her remarks later in the day, saying she did not think there was “going to be an inflationary problem” and that she appreciated the independence of the US central bank.

Investors had also banked gains from technology shares on Tuesday, after a strong run of quarterly results from the sector underscored how it had benefited from coronavirus lockdowns. Apple fell by 3.5 per cent, the most since January, losing another 0.2 per cent in after-hours trading.

Didier Rabattu, head of equities at Lombard Odier, said that while investors were cooling on the tech sector, a rebound in global growth at the same time as the cost of capital remained ultra-low would continue to support stock markets in general.

“I’m seeing a healthy correction [in tech] and people taking their profits,” he said. “Investors want to be much more exposed to reflation and the reopening trades, so they are getting out of lockdown stocks and into companies that benefit from normal life resuming.”

Basic materials and energy businesses were the best performers on the Stoxx on Tuesday morning, while investors continued to sell out of pandemic winners such as online food providers Delivery Hero and HelloFresh.

Futures markets signalled technology shares were unlikely to recover when New York trading begins on Wednesday. Contracts that bet on the direction of the top 100 stocks on the technology and growth-focused Nasdaq Composite added 0.2 per cent.

Those on the broader S&P 500 index, which also has a large concentration of tech shares, gained 0.3 per cent.

Franziska Palmas, of Capital Economics, argued that European stock markets would probably do better than the US counterparts this year as eurozone governments expand their vaccination drives.

“While a lot of good news on the economy appears to be already discounted in the US, we suspect this may not be the case in the eurozone,” she said.

Brent crude, the international oil benchmark, was on course for its third day of gains, adding 0.7 per cent to $69.34 a barrel.

Government debt markets were subdued on Wednesday morning as investors weighed up Yellen’s comments with a pledge last week by Federal Reserve chair Jay Powell that the central bank was a long way from withdrawing its support for financial markets.

The yield on the 10-year US Treasury bond, which moves inversely to its price, added 0.01 of a percentage point to 1.605 per cent.

The dollar, as measured against a basket of trading partners’ currencies, gained 0.2 per cent to its strongest in almost a month.

Yellen says rates may have to rise to prevent ‘overheating’

US Treasury secretary Janet Yellen warned on Tuesday that interest rates may need to rise to keep the US economy from overheating, comments that exacerbated a sell-off in technology stocks.

The former Federal Reserve chair made the remarks in the context of the Biden administration’s plans for $4tn of infrastructure and welfare spending, on top of several rounds of economic stimulus because of the pandemic.

“It may be that interest rates will have to rise somewhat to make sure that our economy doesn’t overheat, even though the additional spending is relatively small relative to the size of the economy,” she said at an event hosted by The Atlantic magazine.

“So it could cause some very modest increases in interest rates to get that reallocation. But these are investments our economy needs to be competitive and to be productive.”

Investors and economists have been hotly debating whether the trillions of dollars of extra federal spending, combined with the rapid vaccination rollout, will cause a jolt of inflation. The debate comes as stimulus cheques sent to consumers contribute to a market rally that has lifted equities to record levels.

Jay Powell, the Fed chair, has said that he believes inflation will only be “transitory”; the central bank has promised to stick firmly to an ultra-loose monetary policy until substantially more progress has been made in the economic recovery.

The possibility of interest rates rising has been a risk flagged by many investors since Joe Biden’s US presidential victory, even as markets have continued to rally.

Yellen’s comments added extra pressure to shares of high-growth companies, whose future earnings look relatively less valuable when rates are higher and which had already fallen sharply early in Tuesday’s trading session. The tech-heavy Nasdaq Composite was down 2.8 per cent at noon in New York, while the benchmark S&P 500 was 1.4 per cent lower.

Market interest rates, however, were little changed after the remarks, with the yield on the 10-year Treasury at 1.59 per cent. Yellen recently insisted that the US stimulus bill and plans for more massive government investment in the economy were unlikely to trigger an unhealthy jump in inflation. The US treasury secretary also expressed confidence that if inflation were to rise more persistently than expected, the Federal Reserve had the “tools” to deal with it.

Treasury secretaries generally do not opine on specific monetary policy actions, which are the purview of the Fed. The Fed chair generally refrains from commenting on US policy towards the dollar, which is considered the prerogative of the Treasury secretary.

Yellen’s comments at the Atlantic event were taped on Monday — and she used the opportunity to make the case that Biden’s spending plans would address structural deficiencies that have afflicted the US economy for a long time.

“We’ve gone for way too long letting long-term problems fester in our economy,” she said.

Michael Hsu, a senior Federal Reserve official responsible for supervising the largest US banks, is poised to become the next acting comptroller of the currency, ending weeks of uncertainty over the US financial regulator’s leadership.

Janet Yellen, the US Treasury secretary, was set to tap Hsu for a senior post at the Office of the Comptroller of the Currency that would pave the way for him to become acting chief, according to people familiar with the matter. The timing of the announcement could not be determined.

Hsu is currently associate director of the Fed’s bank supervision and regulation division.

He has emerged as a more technocratic choice to lead the OCC compared with other possible choices with higher political profiles, such as Michael Barr, a professor at the University of Michigan and former Treasury official under Barack Obama who was a leading contender for the job. Some progressive Democrats have also been pushing for Mehrsa Baradaran, a professor at the University of California at Irvine, to be selected for the job.

President Joe Biden has not yet chosen anyone to permanently fill the post, which requires Senate confirmation. The White House declined to comment. Yellen’s decision to choose Hsu to lead the agency on an interim basis was first reported by The Wall Street Journal.

Through his role at the Fed, Hsu has great familiarity with the health of the largest banks. The mission of the OCC, which is housed within the Treasury department, is to ensure that national banks “operate in a safe and sound manner, provide fair access to financial services, treat customers fairly, and comply with applicable laws and regulations”, according to its website.

The Biden administration is expected to take a tougher approach to financial regulation than Donald Trump’s officials, amid concerns that hefty doses of fiscal and monetary stimulus flowing through the US economy as it rebounds from the pandemic is fuelling greater risk-taking on Wall Street.

Blake Paulson, the current acting chief of the OCC, was installed by Steven Mnuchin, the former US Treasury secretary, on January 14, less than a week before he left office.

A harrowing brush with Covid as India is ravaged