Shareholders in Compass Group have called on the catering company to answer “critical questions” after its subsidiary was accused of providing inadequate food parcels to disadvantaged children across the UK.

Chartwells, which is owned by the FTSE 100 food group, has faced a barrage of criticism this week as images of meagre rations sent to families to replace free school meals were circulated on social media by parents and campaigners, including Manchester United footballer Marcus Rashford.

Large shareholders in Compass including Legal and General Investment Management, the UK’s largest asset manager, CCLA, a specialist investment group for charities and local authorities, and M&G, the listed asset manager, have written to chief executive Dominic Blakemore to warn that the food boxes provided by Chartwells fell short of expectations.

“As a company that says it is committed to good nutrition and responsible business practices, Compass Group risks falling foul of its own guiding principles,” said James Corah, head of ethical and responsible investment at CCLA Investment Management.

Chartwells, which is the largest UK school meals caterer, has apologised, saying it was “very sorry the quantity has fallen short in this instance”.

But the shareholders, which collectively oversee £3tn in assets, said they wanted further reassurances about how future parcels would meet the nutritional needs of children.

The investors have asked Mr Blakemore to provide details of the estimated cost of the food in the parcels, whether the group conducted analysis on the boxes to ensure that pricing was accurate, and what plans the company is putting in place to ensure future boxes are “fit for purpose”.

“Given the potential ramifications, the company must be completely transparent, make adjustments and improvements as required and move quickly to restore faith in its business,” Mr Corah said.

Harris Federation, one of the largest academy chains in England, on Tuesday axed Chartwells as its supplier of packaged meals during lockdown and said it should not be expected to pay for the parcels provided. It will offer its students’ families vouchers instead. 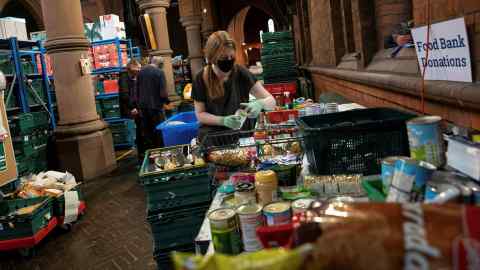 Education secretary Gavin Williamson said the government would support schools that took action against catering contractors and would refund those sourcing vouchers before a national scheme is rolled out next week. Westminster would “name and shame” food providers not delivering against standards, he added.

“When I saw that picture I was absolutely disgusted,” Mr Williamson said.

On Wednesday, Charlie Brown, managing director of Chartwells, said the group would add free breakfasts to its food parcels.

“We acknowledge that when schools were closed it caused some local issues as we switched from meals to parcels. We have been listening to parents and working out how we can best use our resources to do more to help.”

Compass and Chartwells have been awarded school catering contracts worth at least £346m over the past four years, according to data firm Tussell.

It is not the first time that Compass has come under fire over the quality of the food it provides in schools. Its Turkey Twizzlers became the emblem of celebrity chef Jamie Oliver’s campaign for better school meals 15 years ago because of their questionable nutritional value.

Other signatories to the letter include Church Commissioners for England, which oversees investments for Anglican clergy, the Jesuits in Britain and Rathbone Brothers.