Pope Francis is giving his blessing to a coalition of large investors, companies, unions and foundations that are pledging to make capitalism less socially and environmentally damaging.

The Vatican will on Tuesday lend its name to the Council for Inclusive Capitalism, whose members must commit to measurable action to create a more equitable and trusted economic system, including adherence to the UN’s sustainable development goals.

The alliance marks an embrace of big business and finance by a head of the Roman Catholic Church who has warned of the idolatry of making profit one’s only purpose and called unfettered free markets the “dung of the devil”.

In a statement, Pope Francis said that a fair, trustworthy economic system that could address humanity’s biggest challenges was “urgently needed”. The group’s leaders had taken up the challenge of making capitalism “a more inclusive instrument for integral human wellbeing”, he said.

The council’s founding members, who will hold annual meetings with the Pope, include the managers of $10.5tn of assets, companies with a combined market capitalisation of more than $2tn and groups representing more than 200m workers around the world.

They include the leaders of companies including Bank of America, BP, EY, Johnson & Johnson, Salesforce and Visa. The investment groups Calpers, State Street and TIAA are also members, alongside the Ford and Rockefeller Foundations, OECD secretary-general Angel Gurría and Mark Carney, the UN special envoy for climate finance.

“Neither the Vatican nor the CEOs that I know need another meeting. We need action and we need to reform capital markets,” Lady Lynn Forester de Rothschild, the council’s founder, told the Financial Times. The Pope’s support was significant, she said, because “it’s a positive embrace of doing the right thing for capitalism, but it’s also a challenge”.

She said she had been confident that she could enlist leaders in business and finance to advance a more inclusive form of capitalism, but approached the Vatican because “we needed moral guidance”. 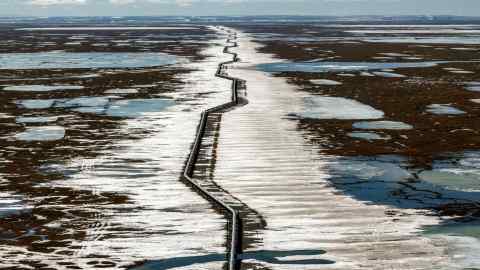 The members of the council have made individual commitments specific to their companies, funds or foundations, and have agreed to a shared set of guiding principles, pledging to create equality of opportunity and long-term value for all stakeholders.

Marcie Frost, chief executive of Calpers, said she was optimistic that the initiative would prompt meaningful change, in addition to the host of environmental, social and governance pledges which most large companies have made in response to public pressure — and the growing sums invested in ESG funds.

“I think it has the opportunity to get real results,” she told the FT. “This has to be a real deal, it can’t be something people verbalise [commitments] but then there’s no action to support [them].”

The California employee pension fund would look to persuade companies in which it invests to sign up, she added, saying that the council’s founding members would serve as “influencers” to get other companies to make similar commitments.

Pope Francis first met members of the Council for Inclusive Capitalism in November last year, telling them that business could be “a noble vocation” if they worked “for the return of economics and finance to an ethical approach which favours human beings”.

Revolut on track for profits as regulators and investors switch focus