Supplies of propane tanks are being depleted in the US with demand rising 75 per cent year on year, as the coronavirus pandemic drives entertainment outdoors.

Hardware stores, petrol stations and big-box retailers cannot keep the portable steel tanks in stock. The scarcity is another way that the pandemic has jolted energy markets, along with depressed or reshaped demand for jet fuel, petrol and electricity.

Demand for propane sold in retail-size cylinders is likely to reach about 500m gallons this year, up from 284m gallons in 2019, according to the Propane Education & Research Council, a group backed by vendors and producers of the fossil fuel.

UGI, the owner of the largest US propane retailer, reported that its AmeriGas cylinder exchange service reached record volumes in the fiscal year that ended in September. UGI delivers tanks to 60,000 locations across the US including stores in the Home Depot home-improvement chain.

Mike Stivala, chief executive of Suburban Propane Partners, said his business that sells fuel to stores that refill consumers’ propane cylinders was “significantly benefited by all of the outdoor living activities”.

Shares of both UGI and Suburban Propane have slumped more than 20 per cent in New York this year, in part because of a warm 2019-20 winter that depressed indoor space heating demand. The Energy Information Administration forecasts that total US propane consumption will be 13bn gallons in 2020, down 2.2 per cent on year.

While there is no shortage in wholesale commodity markets, retail customers have been replenishing their propane supplies at a fevered pace.

Armando Reyes, owner of Carpenter Bros Hardware in Ann Arbor, Michigan, said his tank inventories now last two weeks instead of four, even after he increased his typical order from to 90 tanks from 70. “The last four months has been a challenge,” he said.

At a Home Depot in a New York suburb, a clerk in an orange apron searched in vain for a full tank when a reporter visited the store this week. “They’re all empty,” he said.

Roger Perreault, UGI executive vice-president, acknowledged “supply pinch points” and said that AmeriGas had been buying new, 20lb-size steel tanks to keep up with demand. “We have been investing significantly in additional cylinders to bring into the market,” he said.

Propane use has received support from local governments seeking to save small businesses facing a dire pandemic winter. In Michigan — where governor Gretchen Whitmer last week suspended indoor dining, among other measures — the state government offered at least $3m to restaurants, bars and other businesses seeking to purchase portable heaters and other equipment to serve clientele outside. 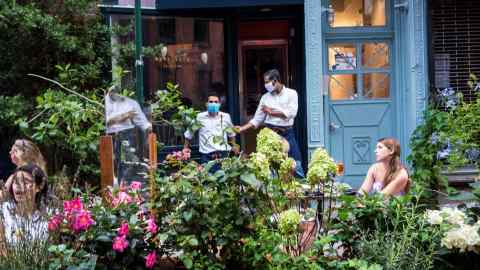 “All the restaurants around here are using outdoor patio heaters,” he said. “There’s probably 300-400 restaurants within a square mile of that store.”

“I will never say heating the outdoors is a positive thing for the climate,” he said.

Deutsche Bank on the lookout to expand its payments business